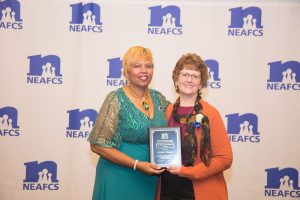 In receiving the Continued Excellence Award, Tidemann was recognized for 31 years as an Extension Educator working within Financial Literacy Education and Human Development/Relationships areas with local, state and national audiences. The NEAFCS Continued Excellence Award recognizes NEAFCS members who continue to be involved in professional development and leadership. The award recognizes NEAFCS members who have previously received the NEAFCS Distinguished Service Award and continue to be actively involved in professional improvement programs, the promotion of professional development of others, and leadership. The NEAFCS Awards fund sponsors the award. Tidemann’s commitment to meeting the needs of individuals, families and communities is exemplary.